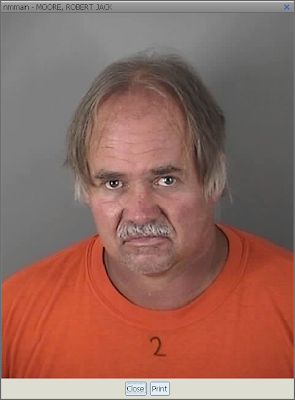 ROBERT JACK MOORE
SON OF THE YEAR
By Michael Horne

Here is a picture of Robert Jack Moore, Jr., 54, taken by the Waukesha County Sheriff's department when he was booked for trying to poison his father by putting lighter fluid and other contaminants in his drinks while at the Pendulum Pub in New Berlin.

He was detected by an alert bartender. The father survived.

The West Allis man has been living in his father's basement and things have not been going well between the two, to the point that the old man threatened to cut his son out of his will. This is apparently what prompted the poisoning -- to get rid of dad before getting disinherited.

Even worse for Moore, the Judge ordered:

Defendant to have no contact with Robert Moore, Sr. (father) or with his residence. Defendant may return to residence 1 time only and only with a police officer to retrieve his personal items. Defendant is not to possess or consume any alcohol.
So, to recap: Moore will be out of the will, out of a home, and probably not out of jail by his September 14th birthday.

This morality tale is brought to you with the compliments of Plenty of Horne.

Posted by Michael Horne at 8:17 AM