IT'S A SWINGIN' DOOR,
NOT A REVOLVING DOOR:
SALOON TO HAVE FIRST NEW OWNER IN 4 DECADES 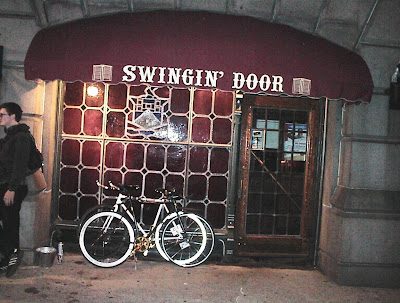 [Iit's time for the Journal Sentinel to write about this, so let's prime the pump.--Ed.]
Michelle Sincere and Kevin "Casey" Swan have filed an application as "Sincere Swan" for a Class "B" tavern license for the Swingin' Door, 219 E. Michigan St. The bar, located in the Chamber of Commerce building, has been operated by Michael Murphy since he assumed the license in 1967. The matter will come before the License Committee and the full council during the October legislative cycle.[Here is the application.]
Swan, a veteran of Slim McGinn's, and an occasional bartender at the Door,  plans to upgrade the bar's menu, but to continue to maintain it substantially as it is -- namely a saloon whose history is rooted in the midst of time.
A photo on the wall shows the already well-worn tavern on the first day of repeal in 1933.

Much earlier photos date to the 1800s  when the space now occupied by the Door was the city's Western Union office -- which itself predated the 1879 building at the spot.
My research for Milwaukee Magazine resulted in the August 2008 article "Full Cycle," which established the location as the birthplace of the bicycle messenger industry in the United States based on contemporary accounts and historical research.
That led to yet another photo -- a portrait of today's bicycle messengers who continue to give the place life now hangs inside.
Mr. Murphy is expected to divide his retirement time between his residence in the city and his country place in Elroy, Wisconsin.
Posted by Michael Horne at 2:56 PM